The villa you are seeing here is “Villa Mainardis ” which was featured in the film “The Best Offer” which Giuseppe Tornatore screened for the first time at the beginning of the year in Italy. Giuseppe Tornatore was famous for “the Star Maker”and “Malena” and of course the unmissable “Cinema Paradiso” one of  those films you never forget.

” La Migliore Offerta” or “The Best Offer” features Geoffrey Rush, Donald Sutherland and Jim Sturgess, in the tale of an eccentric art expert who is invited by a mysterious woman to assess a piece of art. His visit to her home will change his life forever.

The film is screened in several places in Italy and in Vienna and Prague. The music score is composed by Ennio Morricone. 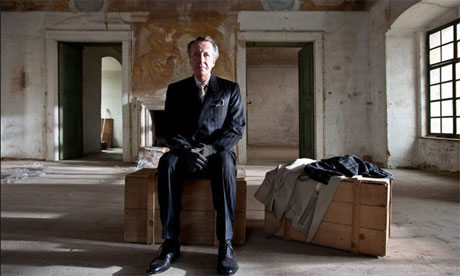 I grew up passing by this villa every single day as it was just minutes away from my own town. I was curious to see how the villa was screened, which in real life is situated in the remote countryside in the small town of Gorizzo in Friuli Venezia Giulia; in the film I was amazed to see by the “magic of film” how  it looks like it is in a city centre. In fact when I first saw the house on film and Geoffrey Rush stepping out from the house onto a busy town centre street it was one of those almost surreal unbelievable moments! Until of course you recollect just how clever filmakers can be!

The main buildings date back to 1648- 1649; . The villa belongs to the Mainardi’s family who were the counts of the town of Gorizzo (province of Udine); a very well respected family.

I enjoyed this film, great special effects and photography although I must say that its storyline is quite predictable.  The film has been screened at the film festival in Berlin.

Let's make the most of pumpkins! These pumpkin fla

Spaghetti with spider crab, pasta with the flavour

Today I started my day with these delicious homema

Pork scaloppine! A classic Italian. They are thinl

Pizza 'pizzeria style'! I had fun testing this cut

Happyness is finding porcini mushrooms as big as t

Apple and berries crumble with polenta flour for e

The last tomatoes of the season. Beautiful and ful

Let the work begin..fig's jam is on its way! I can

Nonna made a superb pasta sauce with her homegrown

Just picked up these beauties from my dad's field.

Discovering the best of slow food

Any cookies that may not be particularly necessary for the website to function and is used specifically to collect user personal data via analytics, ads, other embedded contents are termed as non-necessary cookies. It is mandatory to procure user consent prior to running these cookies on your website.

This function has been disabled for My Little Italian Kitchen.